Cirque Eloize is on it’s way to Jozi

Cirque Éloize iD has just opened in Cape Town this week, and is heading to wow Joburg audiences with it’s blend of breathtaking acrobatics and street dance, at Montecasino’s Teatro for a limited season opening on Wednesday, 30 November and ending on 24 December.  Tickets are on sale at Computicket.

Directed by Jeannot Painchaud and brought to South Africa by leading local promoter, Showtime Management, Cirque Éloize’s iD has been enjoyed over the past 7 years by more than 1 million spectators in over 1000 performances in almost 100 cities across the globe in 30 countries. On stage, there’s speed, powerful performances and a jaw-dropping spectacular trampoline-finale that is guaranteed to leave the audience in awe.  Behind the scenes there’s a story, a dream and a host of interesting facts and figures. 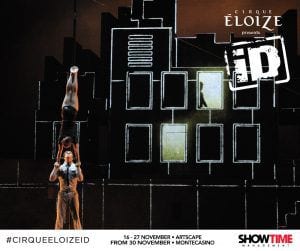 “iD” is one of eleven original productions under the Cirque Éloize banner. Positioned at the heart of the renewal of circus arts this Montreal-based company has been creating moving performances filled with magic for more than 23 years. Proudly boasting more than 4,000 performances in over 500 cities and 50 countries, the worldwide popularity of Cirque Éloize keeps growing. In addition to its touring shows, Cirque Éloize develops custom made concepts for international special events. To date, more than 1,400 events have taken place, seen by over 3 million spectators.

With iD, Cirque Éloize presents a show positively crackling with daring and modernity. Cirque Éloize’s iD is a blend of circus arts and urban dance: b-boying/b-girling, breakdance, hip-hop and more. The scene is set in the heart of a city, in a public space where people seek refuge and a chance to shed their anonymity; a place where identity is forged and individuality is expressed to a stimulating soundtrack created by composers Jean-Phi Goncalves (Beast) and Alex McMahon. The company is integrating multimedia for the first time in its 9th original creation, giving this show a unique feel. Fifteen performers from 14 disciplines help create iD’s entertaining and resolutely urban universe, in keeping with Cirque Éloize’s tradition of using multidisciplinary performers from around the world. 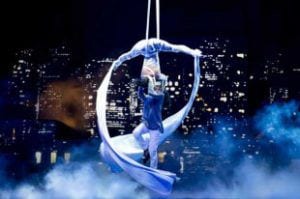 The response to the show’s first season at Montecasino some 3 years ago was phenomenal, resulting in a sold out shows and a high demand for tickets.  The volume of requests lead to this year’s return SA season which includes Cape Town for the first time.  Two cities, 44 performances by 15 artistes including acrobats, aerialists, a trial biker plus hip hop and break dancers in an intimate theatre setting creates an unrivalled entertainment experience for families and the young at heart

20% Discount on groups of 20 and more – midweek performances only

Go on, raise a glass with Vriesenhof this Grenache Day…

Homerun for all four Contantia Glen wines in 2020 Atkin Report…

Steenberg claim a trio of Tim Atkins medals in 2020…