Sandstone Estates in the Eastern Free-State received the 2016 Business of the Year Gold Winner Award for Tourism at the annual ROCCI/FNB Business Awards during a glittering gala event held at Silverstar Casino on 5 November 2016.

ROCCI, the Roodepoort Chamber of Commerce & Industry, and FNB, First National Bank, seek to identify and acknowledge businesses country wide which have achieved success and embody the spirit of enterprise. The Business Awards reflect 30 years of unsurpassed growth in a highly competitive industry.

“We are honoured and immensely proud of this award. It serves as further inspiration for our committed team to not only continue creating jobs and business success going forward but to preserve the best of our past for the future,” says Mike Myers, director of the established farming estate, who represented Sandstone Estates at the awards ceremony.

The Sandstone directors first got wind of their nomination for the coveted award in early September this year during a meeting with their banker, FNB, when Mohammed Cassim, Segment Head of FNB, informed them that FNB had put Sandstone’s name forward as a nominee. 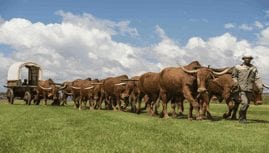 Sandstone was subsequently invited to deliver a presentation on 26 September 2016 to a panel of judges, including representatives from FNB, SAICA (South African Institute of Chartered Accountants, the Chief Adjudicator), Business Partners and BEBE’s Events’ Ellen Oosthuizen.

The Keynote Speaker on the evening was Nicolina Di Santolo, former President of the Italian Chamber of Commerce and the Guest Speakers were Michelle Geraghty, FNB Regional Head for Gauteng South West; and Jeremy Lang, Regional General Manager of Business Partners Limited.

This prestigious award comes at a time during which the Sandstone team is preparing for its major tourism event taking place from 30 March to 9 April 2017, The Stars of Sandstone Steam and Heritage Festival, which was launched in 1999.

Sandstone is a popular international movie location and also draws attention as a popular events and team-building destination. It has the largest collection of 2ft narrow gauge locomotives with 30 working locomotives, the largest such collection in the world, and is supported by over 250 different types of rolling stock, from passenger trains to varied freight trains. Picture vistas of the majestic Maluti Mountains, cosmos flowers as far as the eye can see, and 30km of private railway track in such surrounds…

Every resource available on this fertile, beautiful land, from ever-expanding cattle herds to harvesting cosmos, soya, wheat, maize and sunflowers, is utilized at Sandstone. The teams of Afrikaner trek oxen which are bred and trained on the farm are complemented by a large cross section of working ox wagons, some of which date back nearly two centuries.

For more information on Sandstone Estates, go to www.sandstone-estates.com