Calling all theatre lovers, musical lovers, dance lovers and pretty much anyone who enjoys a good show – Sister Act is in town! Based on the movie made wildly famous in 1992 by Whoopi Goldberg, Sister Act is now on stage at the Joburg Theatre from 10th July until 16th August and is most certainly not to be missed.

Directed by the legendary multi award winning director, Janice Honeyman, and including an all star cast of the likes of Kate Normington as Mother Superior, Keith Smith who will play Monsignor O’Hara and the show also features rising star Candida Mosoma as the divalicious Deloris van Cartier.

The role of Deloris takes someone with a star personality, and Executive Producer Bernard Jay saw that in Candida the minute she walked in to audition. “It’s a star role for a star personality with star attitude.  When Candida Mosoma walked into the audition room and started being Deloris from the first moment, we all knew we had found our star.” says Bernard.

Although based on the move the show prides itself on being a “non-replica” production and is led in its musical direction by Rowan Bakker with choreography by Nicol Sheraton.

The plot follows a rather dramatic disco diva by the name of Deloris van Cartier, who accidentally witnesses a murder and must go in to protective custody. With such a large profile, the police choose to place her in a convent – convinced that no one would ever dream of looking for her there. 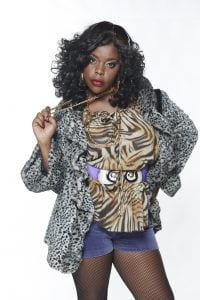 So, disguised as a nun, Deloris finds herself rather cramped in the rigid structure of the convent, and the uptight Mother Superior. Deloris becomes involved with the choir, and breathes her passion for life and disco fever in to the quiet nuns, and suddenly the convent is lit up with a renewed vigour for singing and dancing, much to the disgust of some of the other nuns.

Sure as anything Deloris manages to blow her cover and soon she is being chased by the gang, who find themselves up against a rather formidable bunch of nuns.

Gospel music, catching dance scenes and a story so moving will find you riveted to your chair as the story unfolds – and likely you will wind up on your feet clapping and stamping at the end for a cast that rocked the rafters.

he New York Times said of Sister Act: “When the wimples start quivering, the pinched mouths break into sunbeam smiles, and the nuns start rocking to raise the Gothic rafters, all’s right in the kingdom of musical comedy.”

Sister Act is brought to South Africa by the City of Joburg in association with MNet and is on The Mandela stage at Joburg Theatre from July 10th to August 16th.

Feel free to tweet Sister Act on @joburgtheatre. The hashtag for the show #SisterActSA