Held on Sunday 19th April 2015 at the illustrious Maslow Hotel in Sandton, the PRISM Awards, now in its 18th year, is a veritable see and be seen for anyone in or related to the public relations and communication industry. This year saw the judges reviewing 210 entries in to 36 categories, and the aim for 2016 is 300 entries from not only within South African borders but from the rest of Africa as well.

I was lucky enough to be invited to be part of the media contingent, and managed to set up camp next to the lads from Cliff Central, and interview some of the coolest and most dynamic movers and shakers within the South African Events, Fashion and PR Industry. 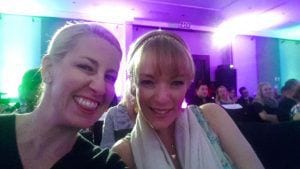 First up on the interview list, the man behind the magic of Facebox Fun Photo Booths, Bruce Hill.

Bruce has been a photographer for many years, and accidentally stumbled on pictures of photo booths on the internet about 9 years ago, and they sparked the idea to put a digital system in to a traditional photo booth. He built the first one in his garage over three days with old wooden panels, and meant for it to be a novelty. His friend who was a wedding photographer saw it and asked him to take it to a clients wedding, which he did for free, and it was a hit. And from there Facebox grew and evolved from doing weddings and social events Bruce realized that his main market was more corporate based and that the photographs could be used to put brands on and to move products – be it selling Black Label in a tavern and branding the take home photos, or doing a medical conference, everyone loves a cool photo memory of themselves and photos go on to your fridge to keep as a memento, and hence the branding stays.

Mobile booths can be wheeled around, so the idea is that they come to you, take the photo where you are and give it to you in your hand. Booths can take between 30 minutes to two hours to set up and are fully branded with vinyl panels, distinct to each booth and ultimately each brand being promoted. The technology is quite hi-tech and Facebox makes sure that they put the exact requirements together for each client’s needs.

Coming up in the very near future for Facebox are waistcoats that have a laptop built in to the waistcoat and is worn by the photographer. Once the photo has been taken, this then sends via 3G to the printing point. For example in a shopping mall – take a person’s photo, give them a photo voucher to head to the store to go and collect their photo and give them an in store discount, thus driving traffic to a particular store. Coin operated photo booths aimed at kids in restaurants are the next step for Bruce Hill, clearly a man with his eye on the prize when it comes to evolving in the photographic and picture market.

I then touched base with Sonwabile Ndamase, the man behind the Madiba shirt, and the owner of Vukani Fashions.

Having studied in fashion industry and being taught European fashion, Sonwabile felt that too often African fabrics were being taken overseas and turned in to outfits then returned to Africa as a finished product, and he created Vukani Fashions – Vukani means “wake up” – wake up Africa before it’s too late, you can create your own outfits on your own soil.

Sonwabile met the then president’s wife Winnie Mandela and Zinzi while Madiba was still in prison, and started designing for the family. Through a difficult political time, he slowly became trusted by the Mandela family, and got to meet Nelson Mandela after his release from prison. Mandela didn’t wish to any longer wear the types of suits he wore back in the day before he went to jail, but still wanted an outfit that was representative of his culture and would make his own unique statement, and the rest, as they say, is history.

Vukani fashions have been displayed in New York and Atlanta, pioneering in fashion and even creating the annual Vukani Fashion awards, now in its 21st year. The awards have been endorsed by the SETA qualification standard and they are now educating up and coming, innovating young designers.

Vukani is working on rejuvenating the industry by creating a project for skilled seamstresses who are working in their back yards and bringing them back in to the workplace to generate income for themselves and help to drive the economy. Sonwabile is also enthused about the uniforms that Vukani is creating alongside the Gauteng Economic Development Department for learners with HIV who are not able to afford school uniforms or shoes, and assists in this way.

“Tata, he told me, Sonwabile, I would like you to make a point to leave a legacy for those that have never met me, let them touch me through the clothing legacy that you have designed. Let that be the legacy that changes the lives of the young and upcoming designers. Change their lives so that tomorrow they can earn a living in what they are doing.”

Read more about the amazing Sonwabile and Vukani Fashions on www.vukanifashions.com. 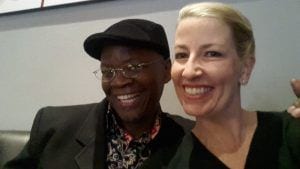 I then had a brief chat with Debbie von Holt, owner of von H Brand Provocateur. Debbie and her team created the new look for the Prisms this year, and wanted to make the event more African themed, what’s rich in Africa, it’s about more than just being a South African, we are now moving in to Africa and the look and feel need to resonate with that.

The logo design has an African theme, incorporating the African Chic dress theme for the evening and pulling in the carpeting, the host and hostess outfits and the drummers, bringing the African theme to life. Von H revamped the logo, design and the awards, pulling the new theme through in to every aspect of the event.

Von H is a boutique style agency, working exclusively with brands such as Hyde Park Mall, Mall of Rosebank, Maponya Mall in Soweto and others, helping them to create new logos and launching malls in a brand new way, create a brand new feel look and feel, either from scratch or renovating an existing brand to take it to the next level.

“A brand is an expression but must remain single minded, like how does the brand resonate with the consumer” says Debbie. She focuses on creating strategies on a 360 degree scale. Her core team is small and they outsource to industry experts who are hands on and work with them regularly. Currently von H are moving more in to video animations, info graphics etc – these are plugging in to the voice of a brand.

“South Africa is so diverse, there are so many barriers, how do you tie it all in that anyone can understand through their differences?” Often we are overloaded with information, von H helps to create a story with visuals and humor that creates an impression that stays with you.

Get von H on board to revamp your brand www.vonh.co.za

Then I literally did the speediest interview of my life with Refentse Shinners, ACSA representative.

ACSA, or Airports Company SA, got involved as a Category Sponsor for the Practices Corporate Communication Award, as this is an award that they felt best reflected their brand and what they stand for. ACSA recognizes that today’s audiences and consumers are very discerning in the way they they engage with a brand, crucial that brand  communicates in an innovative way that appeals to them and standards out.

The most exciting thing about the PRISMS to Refentse is the vibe, she was totally loving the African fashion style, meeting new people who are looking fabulous and making a change in the business space.

ACSA as a business is focusing on spreading their wings beyond SA borders, by creating Ghanaian and Indian partnerships, and aim to provide world class airports and services, and want to create the same experiences by sharing their expertise, hence their expansion in to the rest of the continent and globally. ACSA are involved with Tourism Indaba in Durban in May, and as Refentse says “Airports are the first and last touch that a traveler has with this country, we want to give them the most fantastic experience possible.”

Next I got to meet with Didi Waleng – Friedman owner of Lounge Around, that provide some of the coolest pieces of furniture I have ever seen in my life. I had to ask her about the surname. She loves being a Waleng, and she loves her business partner hubby Marc Friedman, so why not double barrel, right?

Didi has the most beautiful and fun energy, and you can see it in the unique pieces and styles she creates and composes. Lounge Around have been operating since 2005, and although Johannesburg based will deliver around the country. They specialize in unique furniture, accessories, décor, anything and everything that goes in to creating a 5 star, unique event.

She saw the need at the time for creating funky and creating furniture, Lounge Around, its classy and relaxed at the same time.

Color scheme for the PRISMS was black and gold, a very African yet simple and elegant look and feel, and to Didi touch and feel are important, hence the fabulously large baroque themed couches, which were quite the talking piece of the evening. The table decorations incorporated flowers, specifically proteas, again simple and elegant.

Didi tends to buy pieces locally, and manufacture as well according to specifications of clients, or whatever Didi feels would work and be en vogue for her clientele.

Lounge Around will soon be opening a branch in Limpopo, as they feel that the need is great and there is nothing based there that matches their brand, keeping clients happy and creating the classy events that they are known for that wow factor.

For all your event furniture needs contact Didi on www.loungearound.co.za or 011 312 4684. 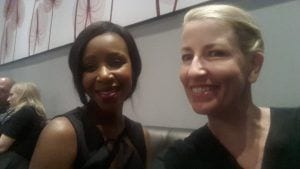 And then it was time for champers, snacks, awards and photographs – please visit my Facebook page for more pictures from the evening https://www.facebook.com/heatherlhook